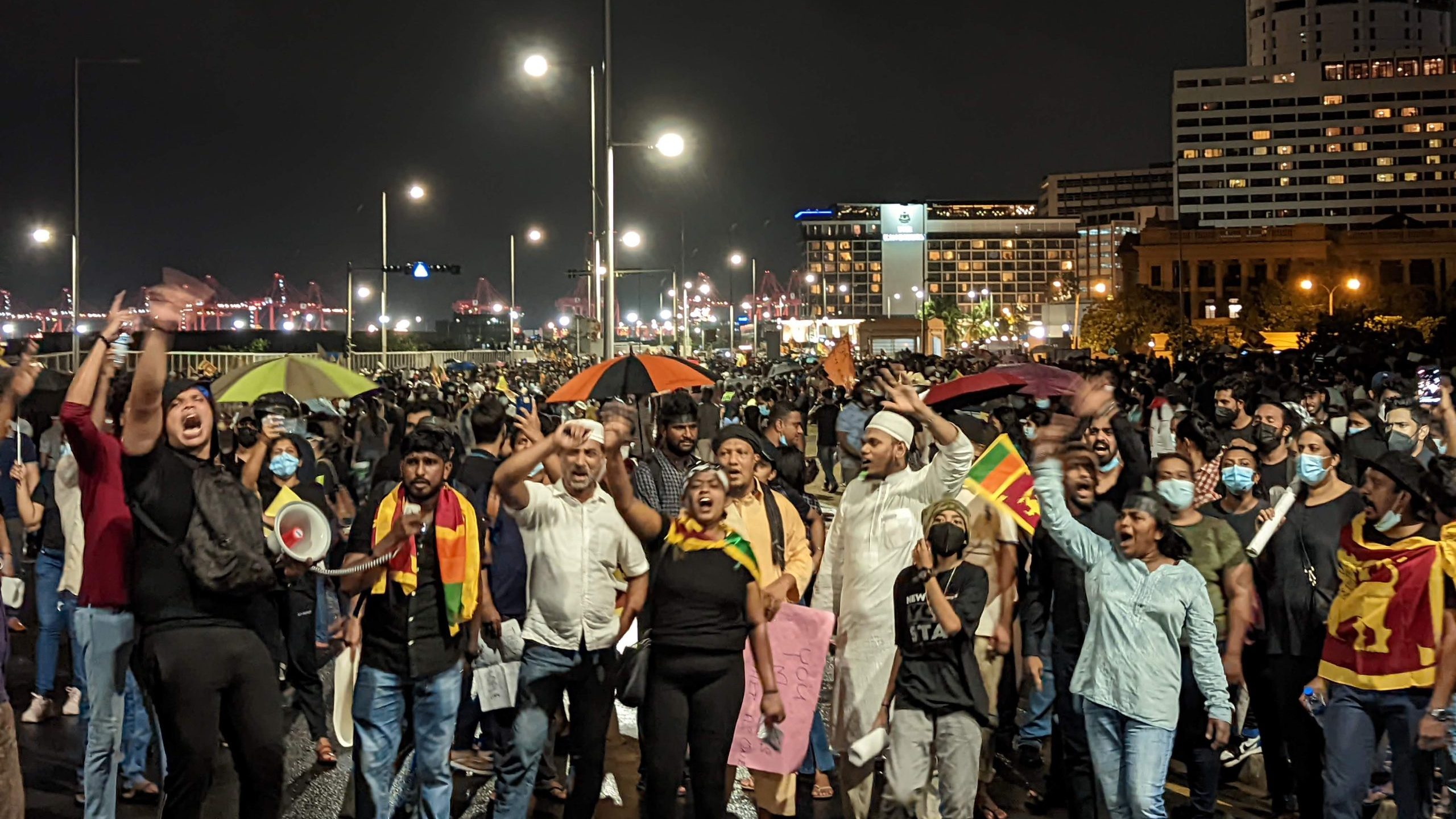 Rally Behind the Flag Sri Lanka

Like many responsible people in Sri Lanka, I have joined the rallies and demonstrations against the current political regime, asking to stop the widespread corruption and asking where all Sri Lanka’s money has gone. It is predominately the youth of this country I see at these events. What I also see is people from across the social religious and ethnic divide.

Muslims breaking fast and sharing food with perfect strangers, young white-robed priests carrying their Sri Lankan flags, families showing their young children one of the basic forms of democracy, protesting in a civilized nonviolent manner, individual protesters standing with the poster in silence and in solitude despite the masses around them, the patriotic flag waving, the more boisterous shouts “GO HOME GOTA” doesn’t go unnoticed.

What is also noticeable is how many ladies are out there, most just as vocal as their men. There are people handing out buns and water, I’m given a banner to hold up, it’s in Sinhalese; translated, it means we are all people of Sri Lanka, be we Muslim, Tamil, Sinhalese, or anyone who loves this country and its people. The Tamil boy next to me says he can’t read my signboard but he is glad I’m there.

Having lived in Sri Lanka for about twenty years, I have never seen such unity, such responsive people, passion for their country flag and for the future of their country. There is no doubt the message is pertinent to the current seniors of the country who need to adopt a similar approach, i.e. common goals for the good of the people.

I observe a man with a child and a small speaker sitting on the steps of the statue in front of the Shangri-La. He is playing music as a protest. The song I hear is from the Scorpions, a band founded in Germany back in 1965. It’s called “winds of change”, which is about political climate change and was later used during the struggle in Germany and finally when the wall came down.

Like a strong wind that will ring the freedom bell♫

Ironically I had never heard of the Scorpions till twenty-odd years ago having arrived in Sri Lanka and spent time going around the clubs, so many local bands played it in Sri Lanka. I could not translate the sign the man had propped up but the music and the moment will always be with me.

We can all imagine how the numerous individuals involved in serious corruption are looking over their shoulders or checking their WhatsApp to see if their ill-gotten assets, homes or deals are becoming more and more in the public arena. Perhaps we should float the idea of a moratorium. Spill the beans of those corrupt deals you are aware of and get immunity against prosecution for information. The corruption is so widespread that it’s likely better to focus on politicians (all parties) and the mega-fixers.

Sri Lanka has an amazing opportunity, perhaps the biggest since independence to create a modern and all-inclusive political structure, devolve or diminish the presidential role, cut the number of parliamentary ministers by at least 50% and create real long-term policies on areas like education, development, health, etc.

Now the skeptics, fat cats and corrupt families will say this is impossible. We may not have enough funds to keep the country afloat for the next month. I do suspect the main motivation of these groups is to keep the status quo. We however have to have that vision of what can be and how Sri Lanka can move upward.

How much has been stolen, we will never know. Whatever the amount it would have saved the country from the state it is now in, but perversely it was part of the nucleus for change and embarrassment for many.

So whatever the timetables the wind of change has started in Sri Lanka and the younger generation will have their day. We will still have a brain drain in the next few years, we need a place our educated youngsters can grow in. For me, like one of the old men on the balcony of the Muppets show, I will always have something to shout and whinge about. The difference is I want to be part of the future, I may have a British passport but my heart and feet will always be here.

3 thoughts on “Rally Behind the Flag Sri Lanka”