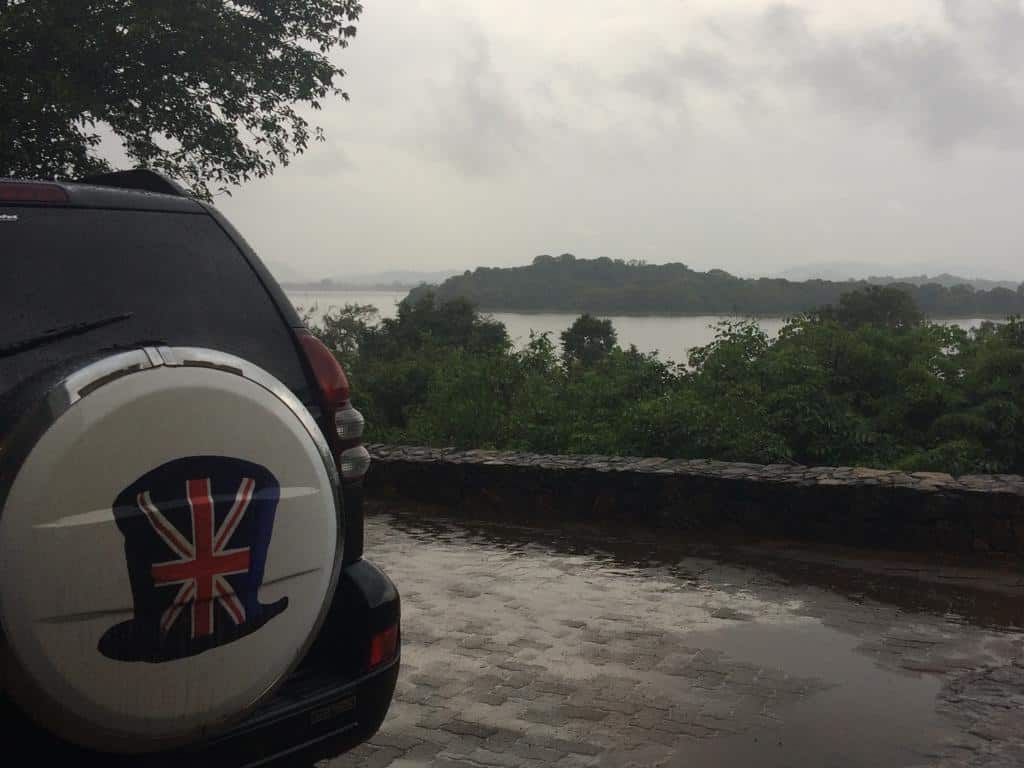 More Jeeps than Elephants in Dambulla

Its about a three hour drive from Colombo to Dambulla in central Sri Lanka and night time driving is faster than daytime. The biggest hazard on the roads are the many drivers who overtake on blind bends in  the road at speed. This normally calls for evasive action by the potential recipient of head on  crashes. Upal, our trusted driver ensures we get close to our destination but satnav and google maps are not working. We manage to ring our host who says “find the Dialog tower and we will send someone to meet you”. Its ironic how, with most of our communication down we are sitting in the car below the said communication tower.

The Whinging Pome Random Rule No. 104

Its pitch black as we await the caretaker, Nandasari. Sitting in the jeep on an unmade road next to a lake, my mind wanders to Elephants, quite common in this area. Our black jeep is about the size of a female elephant, on impact not sure who would come off best, hoping for no surprises. Nandasari flashes his torch light at us and we follow.
We arrive at the River House, rustic though built creatively on a series of cement pillars and RSJ’s , infilled with old timber as the ceiling, and see through blinds to keep you close to nature. Its 3am in the morning and with our hosts we sit by the river and have few gin and tonics and hit the sack by  5am.
The openness of the rooms manifest itself with no ceiling to most of the bathroom, and we are joined by the many creepy crawlers that exist in a forest next to a river, today its mainly centipedes. These little creatures are not to be underestimated. Some years earlier Jessebel and I were stopping at The Culture Club hotel in Dambulla and stayed in a luxury mud hut. It sounds a contradiction but inside the room was well equipped  , clean and was substantially furnished. Before we went to bed Jessebel had the management get someone to spray the outside of the hut.
At least three times I heard her say, “I don’t want a snake or animal getting too close”
She is frightened of snakes, spiders and crawly things. Strange for a girl brought up in Australia, but she was a Sydney girl. At about 2am she jumps out of bed saying there is a snake in the bed and its just bitten her, although I tell her “that’s ridiculous and get back to bed”, she insists on a full bed check. After so much fuss and screaming, there is no snake. we go back to bed. Morning sees a lump on Jessabel’s arm the size of half a chicken egg. We rush into the reception and the staff member looks at the lump and says “Centipede madam, need cream”
A slow start  by all in the morning  reveals the house sitting on three acres of wooded undulating land at the confluence of a stream and a river. The peacefulness of the place embraces you. There is a light drizzle which chills us and makes you feel even closer to nature.
We set off from Dambulla, stop off at a nearby hotel and pick up a safari jeep. In twenty minutes we are in the game park area and head to Muralu Park noted for its elephant herds. There are about 60 jeeps and off-roaders in the car park and about fifty people trying to buy entry tickets for their group. Our jeep driver asks us to pay him Rs.8000 so that he can get the tickets.

The Whinging Pome Random Rule No. 105

We join the queue, after a twenty minute wait we have to pay about 3500 rupees including a 1500 rupees  charge for two of us foreigners. For a local its 90 rupees. I don’t mind subsidizing the locals but what really gets my goat is when Sri Lankan’s say that when they go to England they always pay more than the locals to gain entry into galleries or stately homes . Rubbish. In fact to get into our amazing cathedrals and some museums its free, try getting into the major temples in Sri Lanka for free if you are a foreigner.
Even though I could show the ticket man a copy of my passport/ residence visa  on my phone, he insists on seeing my actual passport and I don’t carry it.
“Young man”,  I say in a condescending tone , “I could get into your international airport, get a flight ticket issued without having need of an actual passport, do you think I’m going to steal one of your elephants? “
The standard Sri Lankan shrug of his shoulders means that either he has no understanding of English or as a government employee he doesn’t give a shit.
We then queue again, not quite queuing more like a stampede of revving  four wheel drive jeeps  all hovering to pass through a narrow gate to have another official check of the paperwork. On all but one Elephant sighting we are accompanied by fifteen to twenty seven jeeps in utter chaos, many facing each other like a bulls about to charge. Other jeeps are some 100 yards away circling awaiting to get into the arena.
Having just come back from Jaipur Leopard park where they limited the vehicles to 15 in the morning and 15 in the afternoon, this circus in most Sri Lankan game parks is disappointing.
At the only  non manic sighting we saw a small herd and a playful youngster who just wanted to roll on the floor , the herd started to move on and the youngster still wanted  to stay put, then an elephant of a similar size came over and whispered something to his brother or sister on the floor.
“Get up ,we’re on the move, mummy will be cross. Let’s go and find a bigger crowd of humans we can look at.”
From my numerous safaris in Sri Lanka, South Africa, Namibia, Zambia etc. I have never been so close to a family of wild elephants before. 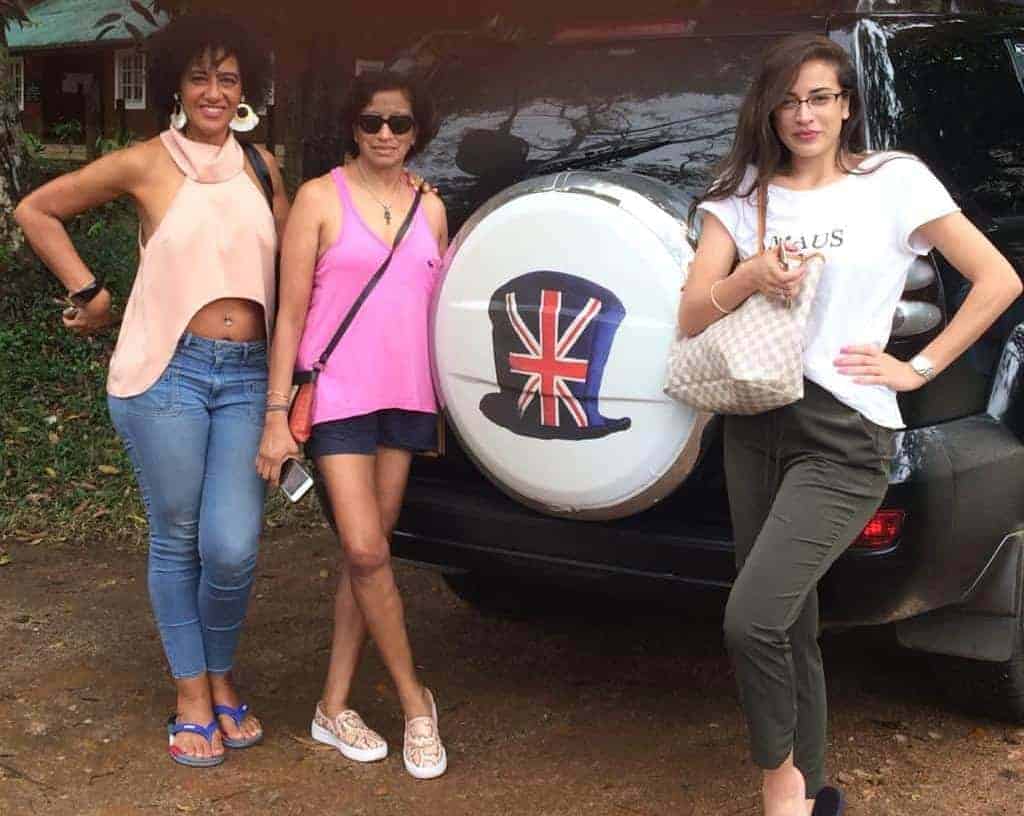 The girls in the team are keen on a foot massage so we head round the lake and get to the iconic Kandalama hotel, built on the rock with water to three sides. I’ve never been impressed with its entrance with part of the hill in its narrow badly lit  entrance corridor. My positive memories rush back having walked through the dark reception and dark lounge to the panoramic lake view and infinity pool. Taking a seat on the terrace I order a filtered coffee but after fifteen minutes get a Sri Lankan coffee of very weak nature. Complaining as the Whinging Pome does often, the chubby middle aged sari clad lady returns with a Lavazza coffee and a big smile. Five minutes later all hell breaks out as over sixty Chinese tourists arrive shouting at each other and being shouted at by the tour guide, they flash their cameras whist posing in their tracksuits .
“I gotta get out of this place, if its the last thing I ever do” comes into my head. Its an old number from the Animals pop group of the 1960’s operating out of Newcastle in northern England. Ironically I had some drumming lessons from the bands drummer, john Steel, a decade or so later.
My discomfort must show as the chubby smiling staff member says, “the coffee is on the house, no charge”. I could have kissed her on her big lips as it meant I got off the place asap. Chinese tourists are here to stay and are the biggest nationality of out bound travelers with many countries including Sri Lanka relying on their numbers to keep tourism flourishing.