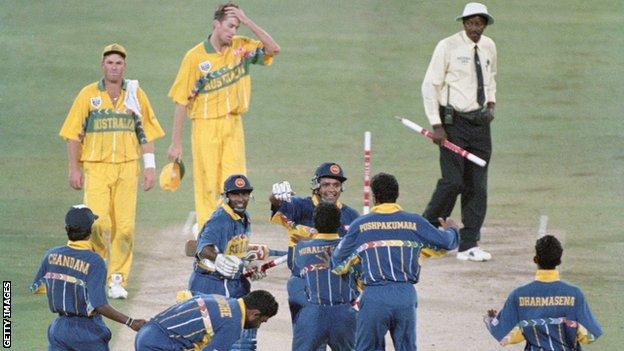 I had never been a big fan of cricket. As a kid in Zambia, we played French cricket where your legs act as stumps and you use a softball with fielders/bowlers standing in a circle around you. Fast forward to March 1996, I happened to be in Sri Lanka on a business development trip, and yes you guessed right, the country came to a standstill on the 17th of March. The big game was on, the Cricket World Cup, it was in Lahore but I watched it with friends on TV at the Colombo Swimming Club. The Attack was led by “Mad Max” Aravinda De Silva playing in the middle order and Sanath Jayasuriya starting strong, the entire team “did the needful”. I have never seen a whole country celebrate in such a way.

Since then, having taken up residency in Sri Lanka 20 years ago, I’ve been to many cricket grounds and watched many games on-site and at city venues, such as the Cricket Club Cafe and Inn on the Green. I recall England struggling in a limited overs match in which Mahela Jayawardena bowled and the ball was caught behind by Sangakkara, the batsman was out . A great quiz question.

Having established an appetite for the game, I watch as much as possible, especially international games, world championships and limited over games. New Zealand vs England in 2019, with a dramatic ending, was one of the best matches I have watched, albeit on TV.

Cricket has a new lease of life. I am waiting for someone to revolutionize the game of golf, as has been done to cricket. Make it a shorter, more exciting game of say 2 hours with a larger number of people being able to play and watch. Golf players are dropping in numbers due to how much time you need to do a full round of Golf, how expensive it is and the lack of space. I think the Victoria Golf Club in Kandy has just scrapped my handicap.

The most-watched cricket in the world is the IPL [Indian Premier League] that started in 2008, with 20 overs and Indian players teaming up with top cricketers of other nationalities. For me this is the fastest, most exciting cricket played today. The competition is played once a year with about 60 games and 8 teams, all well sponsored.

As an Englishman in my adopted home of Sri Lanka, it’s hard to talk of the performance of England cricket today. Reduced performances result in reduced spectators and TV demand dropping; this is leading to low morale among the team. Some key players currently in India are performing well in a different environment. Some say there is a massive racism concern in English cricket, immigrants represent 33% of recreational cricket and local and county clubs whilst only 4% of the English cricket team are non-English origin.

So soon the Australian cricket team are coming to Sri Lanka and we all hope they bring lots of supporters with them. They may need to bring some fuel for the coaches also. I’ll be there watching the games, wearing my Sri Lankan shirt, the wife will be next to me with her Aussie shirt on, but likely asleep.