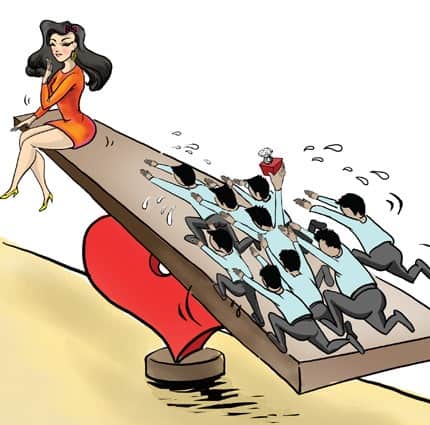 A recent survey established that there are 70 million more men than women in India and China. Never before in human history does there appear to be this massive imbalance. Of the 70 million, the total number of Men under their twenties is 50 million. Government policies and cultures in these countries have resulted in a significant drop in females in China and India. This imbalance will not change in India and China for the next fifty years. Globally there are 5% more males born than females but this percentage increases every year.

Given that Sri Lanka is getting closer to China on many fronts we are already seeing an influx of Chinese to Sri Lanka, though the Chinese have been on the island since the 5th century. Sri Lanka, because of its geographical location being close to India has seen Indians visiting and in some cases staying on the island from 600 BC.

There are many negative aspects to this growing male imbalance in China and India. Loneliness, depression, increased crime, unemployment amongst many young men is becoming an issue. Whilst human trafficking, including the trafficking of brides, to sexual harassment of women and schoolgirls are all on the increase. Unemployed young men are forced into the cities for jobs or to stay at home to do more household work and chores that were typically done by females.

When I first came to Sri Lanka as a single man I recall that whenever I went up to a Sri Lankan lady to ask her to dance, a relative would pop up to check my intentions. That was 20 years ago but I was quite amazed at how shy and protected Sri Lankan women were in those days. Now we are all more multi-cultural and relaxed.

Should parents be so relaxed, going forward? Given we already have a big influx of single men from China and India now living in Sri Lanka? There is a chance that your grandchildren could be Chilankan, but will they care or will you care? Knowing a few first-generation ChiLankans they tend to be more hard-working and balanced than the average Sinhalese person. From my 20 years of working in India and Sri Lanka, my experience is that Indians work harder and are more self-motivated than the average Sri Lankan.

So as my father said to me when I was about to get married for the fourth time, “well you have tried three English women, maybe a Sri Lankan will come up trumps”
He was absolutely correct.